skip to main | skip to sidebar

I Have To Admit, It's Getting Better 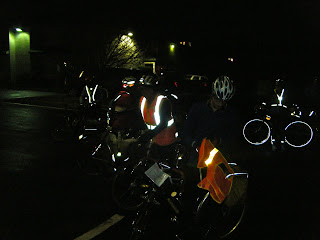 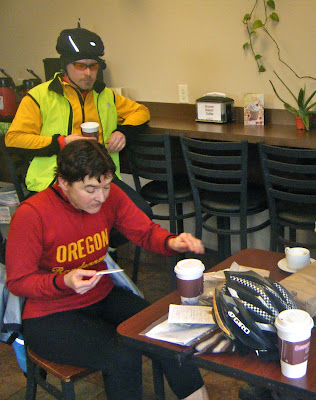 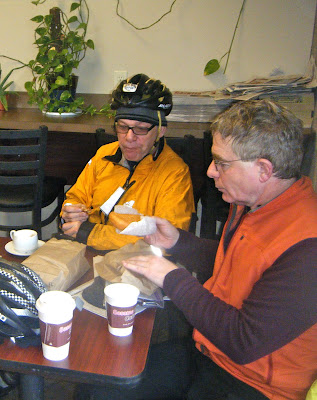 After again spending far too long sitting around and schmoozing with other riders, we set off for the last leg of the first loop. I had been dreading this point. One unpleasant side-effect of my enforced sloth over the past few months is that I had lost all my hill-climbing strength, and this last leg promised a significantly steep climb. On past rides I'd found it little more than annoying, but today I knew it would be unpleasant.
Lynne established her climbing supremacy early on (despite her protestations to the contrary, she's turning into quite the mountain goat), and I watched in dismay as her tail light receded in the distance ahead of me. I eventually lost sight of her as I struggled up Chapman to Leander. Leander is particularly nasty, pitching out at 13% just before the cemetery at the summit. I had to stop to rest twice. TWICE! Oh, the ignominy. When I finally reached the top, Lynne was busy posing for pictures with a grin the size of Montana. Someone get that woman a polka-dot jersey. 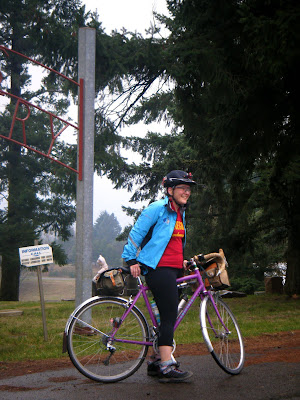 But what goes steeply up eventually goes steeply down, and this time Lynne got to watch me disappear into the distance as I rocketed down Bell and Springbrook Roads. I don't need no stinkin' brakes. She finally caught up with me at the last stoplight before the end, and we rode into the hotel lot together.
Back at Chez Travelodge, Marcello and Kathy were serving lunch. Kathy does a lot of volunteer work making meals for homeless and disable people, and so it was not much of a stretch for her to cook up a storm for a bunch of randonneurs. The menu was grilled cheese sandwiches, so I could not partake, but I had come prepared. Because I knew that we would be coming back to the start halfway through, I'd left a Thermos™ of tomato soup and a tasty hummus, baked tofu and avocado sandwich in my car. That and a handful of Lynne's Fritos™ gave me plenty of fuel for at least the first half of the next 65-or-so miles.
Again, we faffed far too long, but finally set off for Loop #2. When we reached the first stoplight, we found Michal from Eugene. He was unfamiliar with the route and wanted to know if he could ride with us. "Why, coitantly!"
The first ten miles of Loop #2 are unpleasant, there's no two ways about it. It's a straight shot down Highway 99W to Lafayette. The shoulder of the highway are wide, but they are so badly paved and often so filled with debris that a rider sometimes has to move out into the traffic lane. Traffic is heavy, and most of the cars and trucks are traveling well over the speed limit. It gets even worse when the highway passes through the wine town of Dundee, about 2 or 3 miles south of Newberg. The cars slow, but only because the drivers are trying to decide which tasting room to visit first. Rapid, unsignaled turns are the norm. 1:00 on a Saturday afternoon is prime spit and sip hour, so we were on our guard. There are what purport to be bike lines on the highway as it passes through town, but they are invisible under the road debris.
We finally reached Lafayette. Again, many OR Rando routes pass through this town, and MOST of the time we would be turning on Bridge Road. Lynne and I both kept reminding ourselves, "Don't turn on Bridge, don't turn on Bridge." Ahead of us we saw a rider in an OR Rando jersey do just that. "Wrong way!," we called out. He heard us and turned back, but we wondered who else may have made that mistake. Unlike our wrong turn earlier in the day, it was not one that would take a rider where he needed to be anyway.
After passing through Lafayette, we finally turned off of 99W onto Mineral Springs Road and began a long stretch of relentless rollers through some seriously rural territory. Spanish moss on the trees, cranberry bogs, looming black rain clouds. Long stretches of nothing enlivened by slightly shorter stretches of not much. Lynne began to exhibit hitherto hidden "City Mouse" tendencies, freaking out about the isolation and muttering comments about a coming apocalypse. With each turn she became more pessimistic about our survival chances; I don't think anyone has ever been so relieved to see the red roof of the Sheridan Dairy Queen when it hove into view, even if we never were actually "in Sheridan," as she noted with some disappointment.

To get to the DQ, we first had to cross Highway 18. It seems that in every state, whenever there is a report of a multi-car collision, residents can guess on which road it occurred before being told. In Oregon, that's Highway 18. Crossing it at dusk on a winter day requires a certain amount of intestinal fortitude. More so than even a visit to Dairy Queen requires. To do the one to get to the other is a gut-wrenching free for all.

First-time rando Asta and Tomas were at the DQ when we arrived. Asta was STILL filled with first-brevet brio. 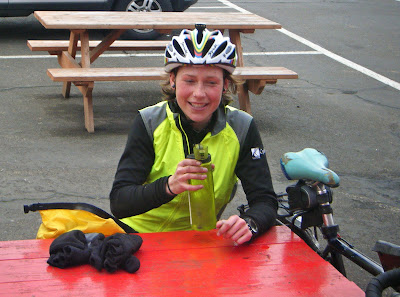 I got some water, Lynne got some coffee, Michal got something but I don't know what, and we settled down for yet another extended faff. Lynne's back was giving her grief, and I was pretty damned tired. Between the relentless rollers and the headwind, I was tired of peddling. And we still had something like 30 miles to go. 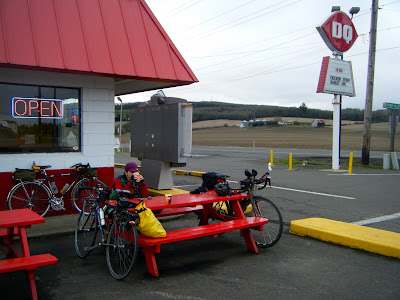 Eventually we acknowledged that Newberg was not going to get any closer while we sat there. Dusk was upon us, so we put on all our reflective gear and turned on any lights that were not already on. We had to ride on Highway 18 for about a mile and a half, which was less than fun, but soon enough we were back on the back roads. The wind was at our backs, and it was still relatively warm, so I was feeling better than I had anticipated feeling at this point. But when Lynne suggested another rest/snack stop in Dayton, I was more than happy to agree. We asked Michal if he minded stopping for a few minutes to eat something. "I would LOVE it if we stopped to eat something."

At the Dayton Central Market (often a contrôle, but not this time), I got some pretzels and a Diet Coke (half of which I put in my water bottle for the rest of the ride,) and Lynne and Michal got equally healthy items. As Michal noted, "Grease, sugar and salt: the major food groups." I noted that the three of us sitting on the curb with our crummy food looked like homeless people. Homeless people in expensive, glow-in-the-dark rain jackets. 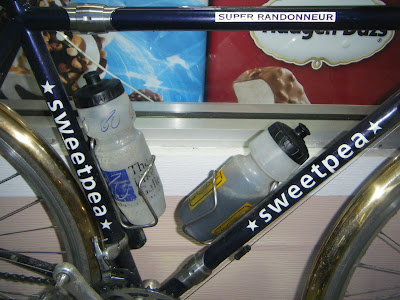 Fortified, we set out for the last 10 miles. I was exhausted. "Look at it this way," said Lynne, "at least we are only having to get back to Newberg from here, and not Forest Grove." Good point, that. It was truly dark now, and when we once again were forced to ride on HIghway 99W, it was very difficult to see the road debris, even with our super-bright headlights. In fact, I soon learned that if Lynne or Michal was too close behind me, the beam from their headlights gave me such a shadow that it blotted out my headlight. Shifting from side to side helped a little. They probably thought that I was dodging debris, but I was really just trying to see it.
11 hours and 10m minutes after we left it for the first time, we arrived back in Newberg, where Kathy was now dishing up lasagna and chicken soup. (Note to other ride organizers: a few bags of tortilla chips and pretzels are just not going to cut it anymore; you've got some big shoes to fill.) But Lynne and I had already made plans to go to the Burgerville next door, a tradition we'd started during our first R-12 when we had rides that were based out of Newberg, so we passed on the meal. We did make use of the shower, however, and I think that Lynne might have taken a wee nap while waiting for me.
Another month, another successful 200K. If I am not careful, I could find myself on the way to another R-12.
And yes, it was better.

Cecil -- I really appreciated reading this report. Not because it hwas harder than previous rides have been for you, but because you're riding again and still enjoying it, even at a slower, recovery sort of pace.

The worst days on a bike are still sometimes better than some of the best days off one. Congratulations. --Beth

Cecil - glad to see you are not only riding again but also blogging again. Congratulations on being on the road back to your amazing self. Hope we get to ride together again before you are again too fast for me.

I am pretty sure you'll be dropping me on the hills sometime soon :-)

Another fun report. Between your and Lynne's reports, I feel I'm getting the 411 I'm looking for. Thanks. Good that "it" was better and that you are better. And yes, Lynne is getting to be quite the climber (and rider). Well done both.

Just one more thing I want to know, if you please, did Asta end up riding back to Portland?

Cecil Anne
I am a woman of uncertain age and maturity obssessed with law, cycling, and food.